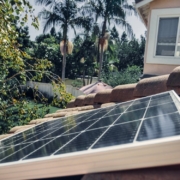 Solar inverter is a device used to convert the energy generated by solar panels, i.e. direct current (DC), into alternating current (AC) for residential and other AC applications.

Solar inverters are connected to more than one solar panel to optimize the performance of the solar panels at the same level. Solar inverter consists of a voltage regulator, step-up transformer, and other electronic components. Compared with diesel generators, it has characteristics of low electric bill, minimized environmental pollution, higher efficiency and more reliable performance.
The solar (PV) inverter market will reach USD 17.9 billion by 2030, growing at a CAGR of 8.8% from 2021 to 2030.

Significant growth in end-use industries such as oil & gas, telecom, mining, pharmaceuticals, chemicals, and healthcare is driving the demand for off-grid solar installations for their respective production and operations, which in turn is driving the growth of the solar (PV) inverter market during the forecast period.

Based on connection type, the on-grid segment holds the largest share in terms of revenue and is expected to maintain its dominance during the forecast period. This growth is attributed to a rise in investment for direct electricity supply rather than storing it in batteries. In addition, advantages of using on-grid solar inverters include easy feeding of energy, easy installation, cost-efficiency, and managing high electricity demand, which is anticipated to fuel the market’s growth in the upcoming years.

On a regional basis, the market has been analyzed across three major regions, including Brazil, Indian and China. Asia Pacific dominates the market in 2020 and is expected to maintain its dominance in the solar energy (PV) inverter market trends during the forecast period. This is attributed to significant players and a large consumer base in the region. Moreover, rapid expansion in the renewable energy sector, increasing investments in upgrading aging power infrastructure, and rapid industrialization in the region are expected further to drive market growth in the coming years.